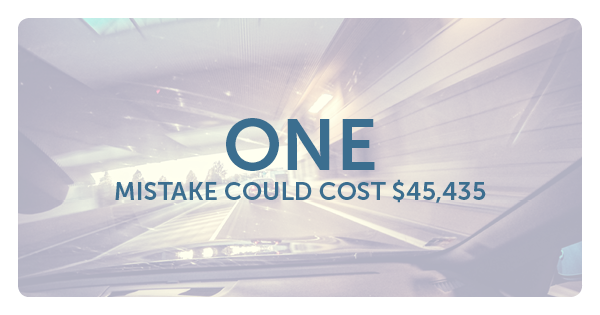 This one mistake could cost you $45,435.00. You’re probably thinking in your head, “There’s no way.” But in reality, this is possible. Drinking and driving can have consequences that effect you for years after the incident, and this is just in terms of receiving a DUI. Below’s scenarios doesn’t include the guilt, jail, or destroyed reputation that you could experience if you do drink and drive and another party is either injured or killed. Be smart and always have a designated driver or take a cab. Keep reading to become aware how one mistake could ruin your life.

How Much Does a DUI Costs

CourtInfo.CA.Gov provides the following list and costs associated with a DUI:

This list and costs are the bare minimum for what a DUI could cost you. It also doesn’t include costs associated with hospitalization, long-term car, or costs associated to issues arising from another parties injuries and personal property damages.

NerdWallet.com lists several other expenses such as posting bond, install cost for an ignition interlock, and lost wages.

Drinking Under the Influence – Consequences Timeline

CoutInfo.CA.Gov provides the following timeline for various consequences associated with a DUI:

This timeline also doesn’t cover if the person who committed the DUI has suffered injuries and it doesn’t include feelings of guilt and pain.

Overall, a DUI could cost you more than you could ever afford and it could cost your life.  Drinking and driving is not worth it in any circumstances. When you look at these numbers and the lifetime effects it could have on you, keep in mind that the $100.00 cab fare you’ll have to pay to make it back home is well worth it compared to $45, 435.00

Check Out Your Savings Below