Climate change can be a hot topic these days, but regardless of one’s views on the subject, scientists have taken an interest in how it might affect the intensity or possibility of future weather-related events.

Natural disasters – whether predicted or not – expose the susceptibility and risks of our home and communities. According to the Fourth National Climate Assessment, weather events have become more frequent, more intense, and more impactful than ever before. Since 1980, there have been a total of 258 weather and climate events totaling approximately $1.5 trillion in damage. Weather-related events pose a risk to our economy, infrastructure, and property.

No matter if you’re a homeowner or shopping for your first home, keeping up with the chances of a weather event in your area is essential. Just as dramatic weather events are on the rise, so are the number of insurance claims filed by homeowners. Claims filed because of natural disasters are also a loss for the insurance company. This means insurance companies determine what areas to write in and price its premiums with risk in mind. This limits options and drives up the cost of insurance for homeowners. It won’t impact all homeowners equally. Even still, you should take the time to identify your risk, quantify it into estimated costs, and make an informed decision about an insurance policy. This guide will walk you through the regional environmental risks, how it impacts your insurance, and what you can do to protect yourself.

How is Your Home Affected?

Our homes are one of our most valuable assets, so protecting them should be at the top of everyone’s list. When shopping for the right insurance policy, look into your risk assessment carefully to make sure you’re prepared both personally and financially for the possibility of a natural disaster. Think about where you live and what disasters have happened in the past. Were you prepared then? Are you better prepared now? Without the right coverage, you may not be able to put in a claim to recover what you’ve lost. You could even find yourself in a position where you’re unable to rebuild your home.

As the possibility of homes being damaged or destroyed by extreme weather increases, so do insurance premiums. In some cases, the risk is so high that insurance companies have withdrawn coverage against the elements in entire areas or even states. The rise in premiums, and the shrinking coverage options, is a serious cause of concern to homeowners. The options left are often more than some can pay.

Lower-income communities are especially vulnerable to weather-related events. Even if they live in a high-risk area and want to prepare for the worst, financially, they may be unable to do so. Increased premiums can make additional private insurance coverage unobtainable. Thankfully, some government insurance programs offer support but may not be able to rebuild all properties in the event of a disaster.

Where is the Risk Higher?

What disasters you plan most for depend at least partly on where you live. Let’s take a closer look at the various natural disasters threatening the U.S., including the places they mostly occur, how they can affect your home, and some recent insurance loss statistics:

According to the Federal Emergency Management Agency (FEMA), 90% of natural disasters in the U.S. involve flooding. Scientists in the extreme event attribution field are better able to identify climate change’s impact on flooding and extreme precipitation. Not only can flooding cause serious structural damage to your home, but it can also damage the personal property in your home as well.

For those who live in a flood zone, the average flood insurance policy will cost you around $700 a year, is required, and must be paid in full each year. FEMA has an excellent online resource tool to help determine if your home is in a low-, moderate-, or high-risk area for flooding. Just type in your address and assess your community’s flood zone. It’s worth noting that 25%-30% of flooding happens in low- to moderate-risk areas, so protecting your home at every level is recommended. 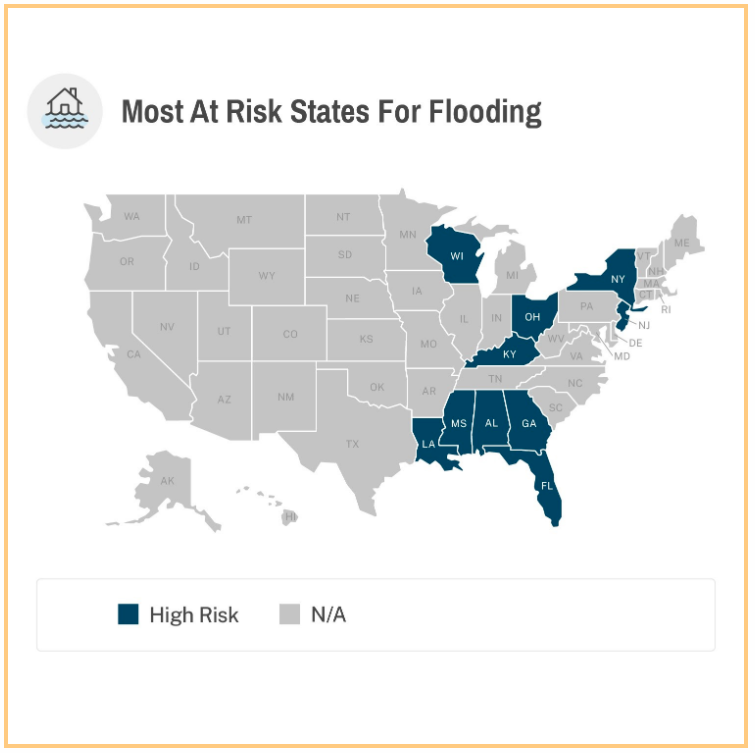 Hurricane season spans from July to November, with a peak in mid-August to mid-September. Knowing when hurricanes are most likely to strike, when a storm is predicted for your area, and how to prepare will put you in the best spot to save yourself and your home. Storm surges are coastal floods that pose the greatest threat of any hurricane hazard. Given low-lying coastal zones are the most susceptible, hurricanes also bring serious flooding and water damage.

Flooding isn’t the only issue hurricanes bring. During its peak, winds can reach up to 200 mph. Your home insurance policy may cover some damage associated with wind, though most will not cover the full extent of hurricane damage. If you live in a vulnerable area, adding windstorm insurance to your home isn’t a bad idea. In 2019, there were 18 named storms during the hurricane season, which was higher than the annual average of 12.

The U.S. Department of Interior suggests 85% of wildfires in the U.S. are started by people. These types of wildfires can escalate from: unattended campfires, downed power lines, burning debris, discarded cigarettes, and arson. The remaining 15% of wildfires are most often started by lightning and lava. Historically, wildfire season ran from rising temperatures and droughts attributed to climate change are believed to contribute to wildfires by providing dry, combustible plants that are more susceptible to fire and lightning strikes. Vegetation and homes may burn down entirely, or be partially damaged, by the heat and smoke of surrounding fires. Insurance coverage is crucial for repairing your home.

Verisk’s 2019 Wildfire Risk Analysis stated that approximately 4.5 million U.S. homes are located in a high or extreme risk zone, with over 2 million of those being in California. Some recent examples include:

The California Department of Insurance (CA DOI) reported that wildfires in 2018 contributed to 13,654 insurance claims and nearly $11 billion in insurance losses paid out for residential properties alone. The CA DOI recommends homeowners in the state make sure their policies are updated by reviewing their insurance coverage and logging an updated inventory of personal belongings in the event of a loss due to a wildfire. 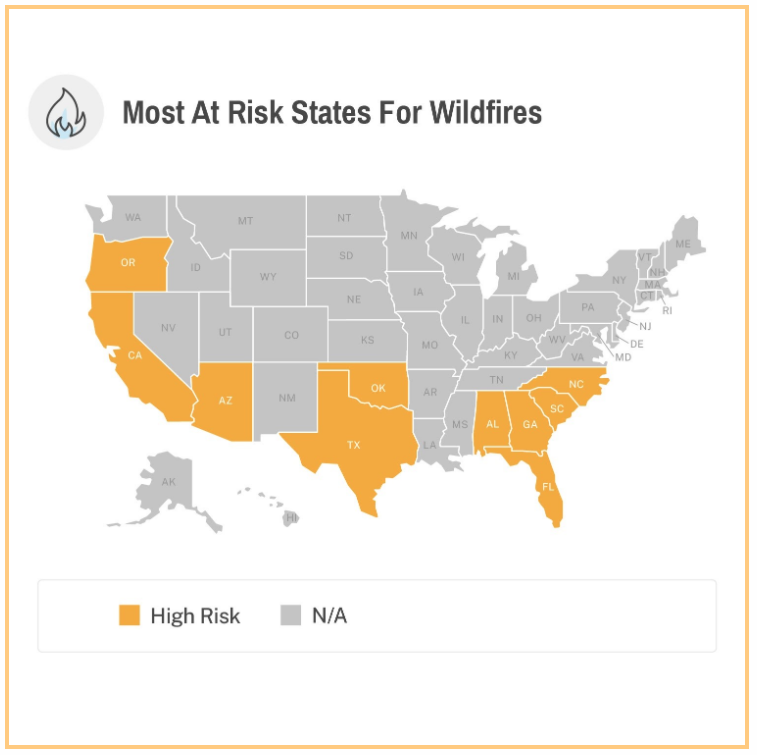 Tornadoes are not limited to one geographic area. They can happen anywhere across the globe. At least one tornado has been documented in 1,000 tornados a year, while Canada experiences only around 100, even though they are the second-highest on the list.

There were 1,520 tornadoes reported across the country in 2019. This is a large increase in comparison with the national average of 1,251 tornadoes (1991-2010), with estimated costs of $1.7 billion. Strong winds and debris are some of the most dangerous impacts tornadoes have, make sure your insurance policy can accommodate the potential damage. 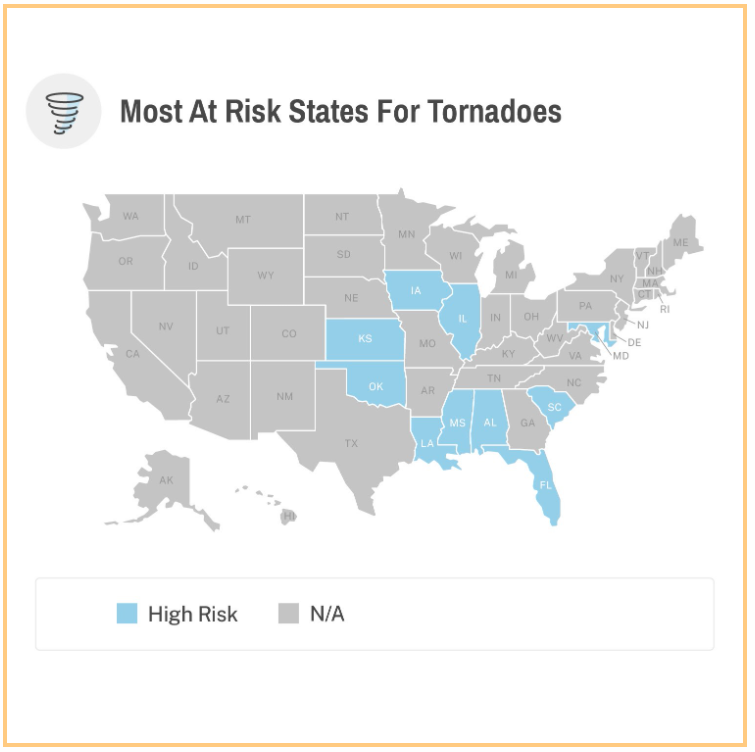 In 2019, the earthquakes of Ridgecrest City, California, caused damage adding up to an estimated $200 million – though insurance losses were much lower, at $40 million. This is because fewer than 20% of homeowners in the area had earthquake insurance. Some may think because they don’t live near a fault line, they are shielded from the impact. But don’t write off your risk just yet. Earthquakes and aftershocks can cause serious damage to your home, even if you don’t live near a fault line. While those who live near fault lines are more susceptible, an earthquake can happen anywhere. Oklahoma, for example, has experienced more seismic activity than usual as a result of oil drilling efforts in the area. 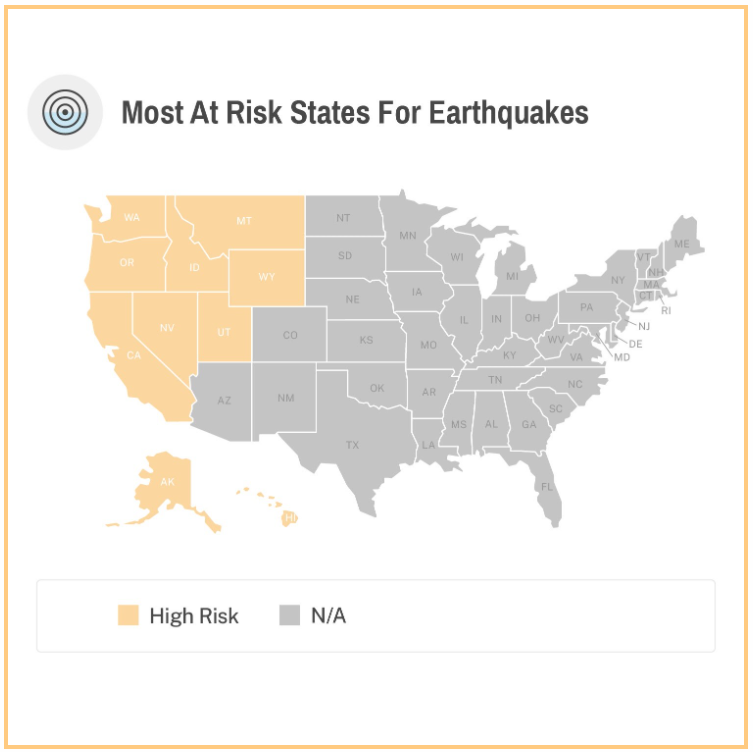 Your insurance coverage depends entirely on the policy you chose and what coverage is available in your state. Every homeowner needs to know the ins and outs of their policy. While tornadoes and fire events may be covered by your homeowners insurance, floods and earthquakes are not.

It’s estimated that 95% of homeowners in the U.S. have insurance. However, 43% of people with homeowners insurance aren’t aware flood damage is not included in their coverage. This is despite the fact that floods are one of the most common disasters. Another uncommonly known fact is no area is truly immune. In the last five years, every single U.S. state experienced either a flood or flash flood. There are only a few insurance companies that allow you to purchase extra coverage for flood damage. However, most companies don’t offer that option. Thankfully, specialized flood insurance is available through the National Flood Insurance Program (NFIP) from FEMA.

Make sure you add any weather-related risk to your coverage from the start. Many companies will not allow you to add additional coverage within 30 days of a predicted weather event. It’s better to plan ahead than be forced to wait and hope for the best. It’s also not uncommon for insurance providers to require a separate deductible for weather-related claims. Earthquake insurance plans, for example, often have significantly higher deductibles than standard coverage, generally 5%-15% of the policy limit. Because earthquakes are more frequent and significant in the California region, the not-for-profit CEA (California Earthquake Authority) offers some coverage options, similar to how NFIP operates.

It may not be a bad idea to keep an emergency-weather fund in case the need arises. Make sure you thoroughly read through the terms of your insurance policy and understand what your coverage provides. Standard insurance policies commonly cover:

How Are Insurance Companies Affected?

Insurance companies also feel the financial losses of drastic weather events. The amount insurers are paying due to weather-related events continue to rise. One way insurers combat this is to price policies based on risk. According to the National Association of Insurance Commissioners (NAIC), home insurance rates have increased by over 50% from 2005-2015, with natural disasters being one of the main contributors to this significant increase. High-risk areas not only come with the threat of natural disasters but high premiums and limited coverage options.

Climate Central suggests insurance companies should require smoke detectors and supporting seat belt laws. Extreme weather is no different. Any proactive steps insurance companies take to mitigate the impacts of severe weather events will have a trickle-down effect that will eventually reach homeowners and policyholders. Ideally, the effect will be insurance premiums stabilizing and more people opting for additional coverage on their insurance plans.

How Can Homeowners Mitigate Risk?

Safeguard your home from area-specific risks

Getting flood and earthquake insurance is the first thing you should do to protect your home. There are a number of other things you can do around your home to give your home the best chance for standing up to disasters.

How Can Homeowners Reduce Environmental Risk?

According to the Environmental Protection Agency (EPA), we can reduce emissions by using less energy, which can reduce air pollution. Reducing air pollution can lower the “greenhouse” warming effect on the Earth’s atmosphere. The Natural Resources and Defense Council (NRDC) claims higher atmospheric temperatures can cause weather events to be more frequent and extreme. Therefore, you can take steps to make a difference in the effects of climate change and extreme weather. And, every little bit counts.

Making environmental purchases is a step in the right direction. Not only can things like solar panels or heat pumps lessen your contribution to air pollution, but as a bonus could save you money in the long run. Upgrades to your home could potentially minimize future claims and earn you discounts or reduced premiums from your insurance company. While some upgrades are expensive upfront, they could save you thousands of dollars in the event of an emergency.