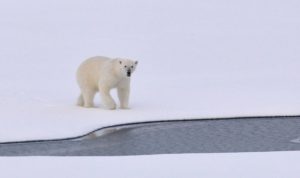 Who are they? And why are they jumping into a freezing body of water?

The origin of the polar bear plunge, as these events are often called, isn’t entirely clear. What is clear is that it happens worldwide. Russians and Scandinavians were doing it before it even had a name.

In the U.S., there are events across the country, particularly on New Year’s Day. In Boston, members of the L Street Brownies have been dipping on New Year’s Day since the early 1900s. And the Coney Island Polar Bear Club in New York has been around about as long. But members don’t just swim in the Atlantic Ocean on the first day of the year. They swim every Sunday from November through April.

The largest American plunge is the Maryland State Police Polar Bear Plunge, also known as “Plungefest.” The event, which draws more than 10,000 annually and raises money for the Special Olympics, takes place in January, February or even March.

As for why they do it, some say taking a dip in frigid water is rejuvenating. In addition, participants say the plunge increases energy and decreases stress.

Experts in the medical community, however, aren’t completely on board. While healthy people feel discomfort for about 30 seconds, the shock of the cold water is a real risk for others, particularly for those with heart disease or other health issues.

So, if you’re considering taking the plunge, just ask your doctor first. We here at American Heritage will applaud you, even if we think you’re just a little bit, well, crazy!