Flood insurance is an important policy for most homeowners to have. But only about one in seven homeowners purchase this critical safety net to protect them from the ravages of flood water.

What is Flood Insurance?

Flood insurance is a specialized policy that protects your home and belongings against damage from flood waters. If you’re like most homeowners, you probably wonder if you really need a flood policy in the first place. But here’s the thing: Flood damage is typically not covered under your home insurance policy. To be protected, you need this additional policy.

Furthermore, if you live in a high-risk flood area and have a mortgage, your lender may require you to have a flood policy through FEMA’s National Flood Insurance Program (NFIP).

But even if you live in an area with low or moderate flood risk, you may still want to buy a policy. Here’s why: According to the NFIP, a single inch of flood water in your home can result in $25,000 of damage to your property. What you don’t want to find out after a flood is that you’re not covered under your home insurance. Because by then it’s too late. The damage is already done and you’re left without recourse.

What Does Flood Insurance Cover?

Flood insurance covers a lot of things, as we lay out below. But there are certain circumstances where something that might normally be covered isn’t because of the way flooding happens. 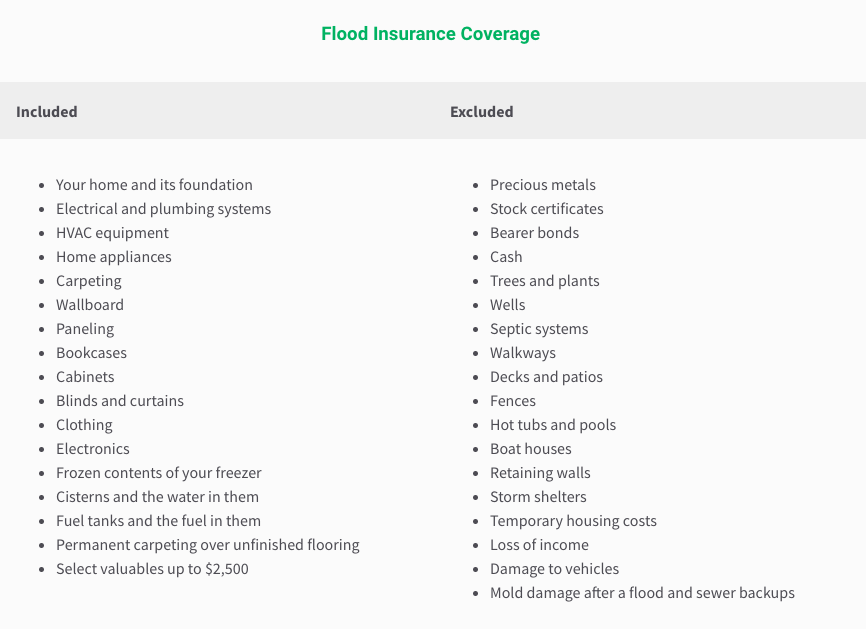 Coverage limits on policies sold through the National Flood Insurance Program cap out at $250,000 for a building and $100,000 for its contents.

The average flood insurance policy runs about $700 annually, according to FEMA. But that’s just an average. If you live in a low risk area, it could be hundreds of dollars lower each year, according to the most recent numbers.

In fact, if you don’t live in a high-risk flood area, you may qualify for what’s called a Preferred Risk Policy. Premiums on those kinds of policies can be as low as $137 annually!

Factors that can drive the quote up or down include:

Unlike other kinds of insurance, it actually doesn’t pay to shop around for a better flood policy premium. According to FloodSmart.gov, the “National Flood Insurance Program (NFIP) flood insurance rates do not differ from company to company or agent to agent. All policy premiums include certain fees and surcharges, so ask your agent about these when discussing a price quote.”

Deductibles apply to all policies purchased through the NFIP. Be sure to ask about yours before purchasing a policy.

For higher property limits, you can speak to your agent about getting flood insurance through the private market.

How Long Does it Take to Get Flood Insurance?

The thing about a flood insurance policy is you can’t wait until you need it to actually buy it. That’s because coverage typically doesn’t become effective until 30 days after the date you purchase the policy. So if you wait for a Superstorm Sandy or Hurricane Katrina to be on your doorstep, it’s already too late.

There are only a couple of exceptions to the 30-day rule:

As a starting point, you’ll probably want to call your existing home insurer and see if they write flood insurance policies through NFIP. Not all insurance agents offer the policies, but you’ll find that thousands of them across the country do.

If you have no luck with your existing home insurer, then continue your search for a policy through FloodSmart.gov – the official website of the NFIP that serves as the main clearinghouse for government-underwritten flood policies.

Even if you live in a 100-year flood plain – which means that statistically a catastrophic flood will only happen about once a century – it’s a good idea to have a policy in place before you need it. Keep in mind that more than 20% of flooding claims come from areas that are not technically high risk, according to the NFIP.